Alice Mann is a South African artist working between London and Cape Town. Born in 1991, she belongs to the post-apartheid generation that grew up in the new democracy optimistically known in its early days as the ‘Rainbow Nation’. She is also part of a generation that, today, bears witness to the social inequalities that persist in South Africa. This is a topic she has explored from the early days of her practice.

In Southern Suburbs (2013) created in the year she graduated from Michaelis School of Fine Art (University of Cape Town), she addressed the economic gap that still exists in South Africa through a series of portraits set in interiors or domestic spaces. Doorway, living room, dining room, bedroom, a stable, or garden, take on a different meaning as they are respectively home to the photographed owners, and a socially and racially-charged workplace to the domestic workers. This series, which theme and aesthetics echo a long tradition that can be traced back to South African colonial painting (Irma Stern, Dorothy Kay), and are contrasted by critical representations in contemporary photographic and sculptural portraiture (Zanele Muholi, Mary Sibande), has raised the issue of white privilege and the complexity of casting a critical eye on South African society from this particular position.

On a conceptual level, emerged from the very beginning a distinctive trait in Mann’s photography which is to create visual narratives associating social groups or communities and clothing as an identity marker. This is evidenced in the bodies of work she created after moving to London in 2014. For instance, (Always) Wear Your Best on a Sunday (2014-2016) portrays Walworth Methodist Church goers in London, who are Africans, wearing elaborate outfits and elegant head-wraps made out of a variety of wax fabric. Mann photographed her subjects against a neutral backdrop that served to highlight the colourful fabric. An interesting point in this series is that the persons photographed are active participants in the way they want to be portrayed. Mann even said that some of them ‘would return with a different outfit and ideas about how they would like to pose. Often, they would make reference to older photographs I had taken, or images of their own, in an attempt to achieve a particular look they had in mind.’

The same applies to Maximum Effect (La Sape) (2016) that has led Alice Mann to photograph sapeurs in London and Paris, adding to the imagery of this unique movement. La Sape (Society of Ambiance-Makers and Elegant People) is an ideology and lifestyle said to have emerged in Kinshasa and Brazzaville in the 1920 30s. It notably gained prominence in the Diasporas in the 1970s through the likes of the iconic late Congolese singer Papa Wemba. La Sape is the art of fashion and elegance expressed through brands, originality and mannerism. From the outset, it was a performative way of challenging European preconceived ideas and stereotyped views on Africans. Self-image remains at the heart of la Sape and, in Mann’s work, manifested itself in the sapeurs being involved in art directing and
styling the photo shoots.

Self-image is also central to the acclaimed Drummies series (2017 – ongoing) on drum majorettes in South Africa. After finding out about the popularity of the sport in marginalised communities, despite its decline in mainstream sports culture, Mann set out to photograph the girls and young women practicing it. This work took Mann’s photography from formal portraiture to a combination of portrait and documentary style. Often taken outdoors, the images, present individual and group portraits, and scenes where the drummies are either performing for the camera with a clear sense of how they want to be photographed or, on the
contrary, oblivious to Mann’s presence during rehearsals, as they perform synchronised routines. Once again clothing is a distinct feature with the colourful uniforms representing the team. These and the matching flags are identity markers bringing the team members together under the same ‘colours’.

The practice and discipline required to master body postures and be able to execute specific movements during the performances result in a sense of pride, confidence and empowerment which, as Mann observed, ‘is vital in communities where opportunities for young women are often severely limited.’

In this respect, the Drummies series positions the photographed majorettes in a place of subjectivity that differs from Mann’s earlier work. If one solely focusses on the portraits, beyond the rough surroundings sometimes present in the images, one is forced to go beyond any preconceived idea and compelled to consider the many possibilities the future might hold for those girls and young women.

Alice Mann is currently preparing a book on the Drummies featuring an essay by Christine Eyene, to be published in early 2021.

« the Drummies series positions the photographed majorettes in a place of subjectivity that differs from Mann’s earlier work. If one solely focusses on the portraits, beyond the rough surroundings sometimes present in the images, one is forced to go beyond any preconceived idea and compelled to consider the many possibilities the future might hold for those girls and young women. » 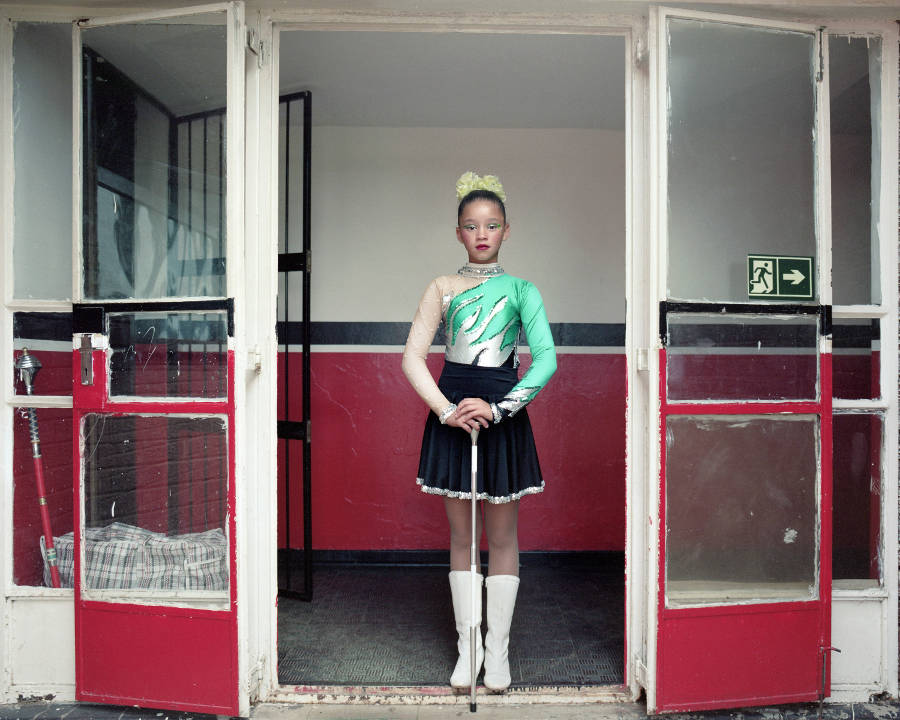 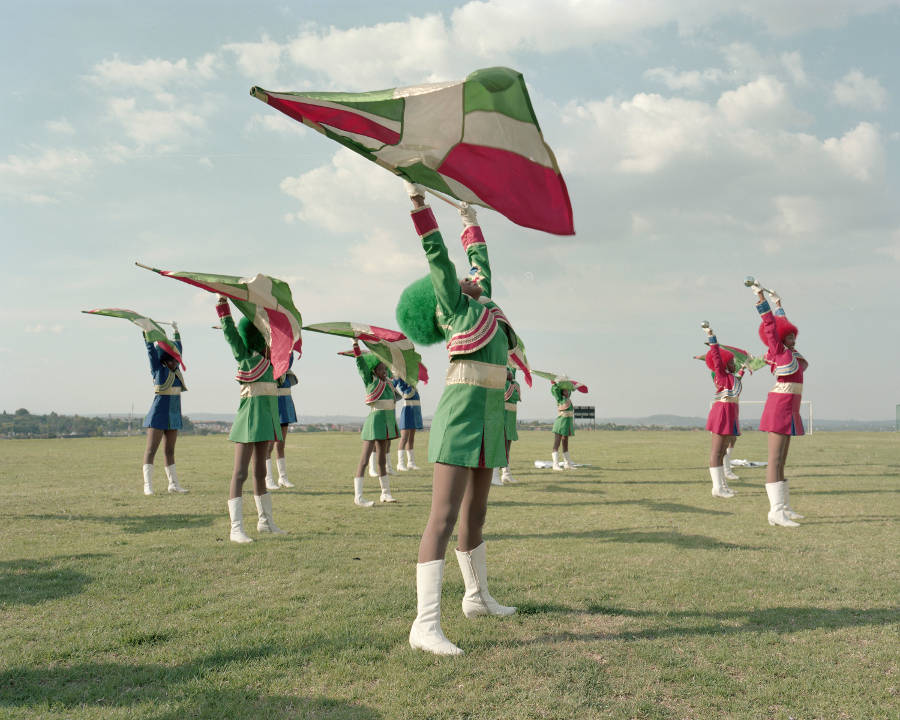 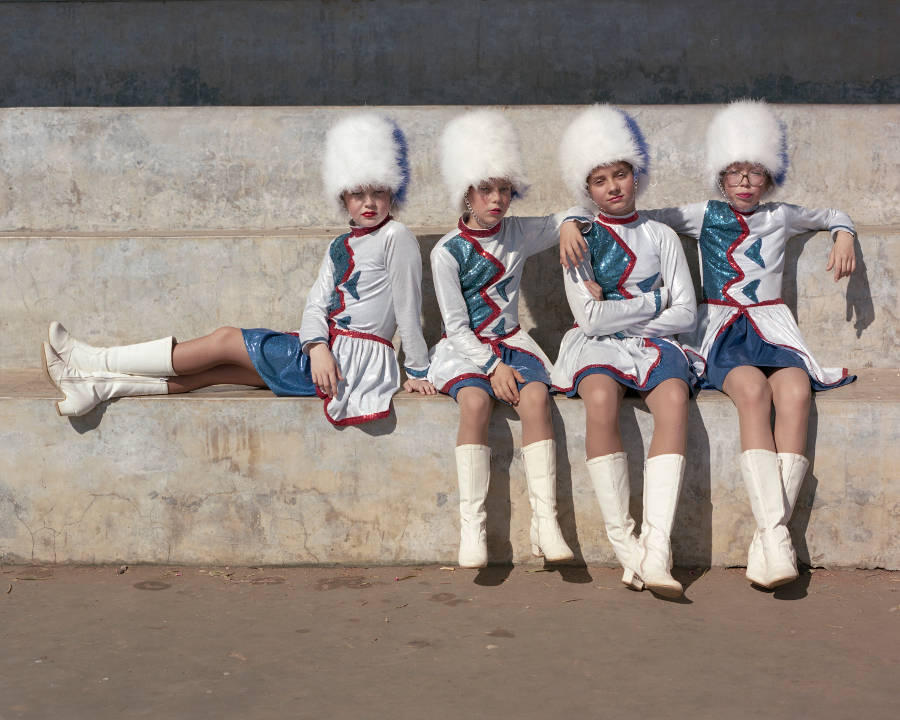 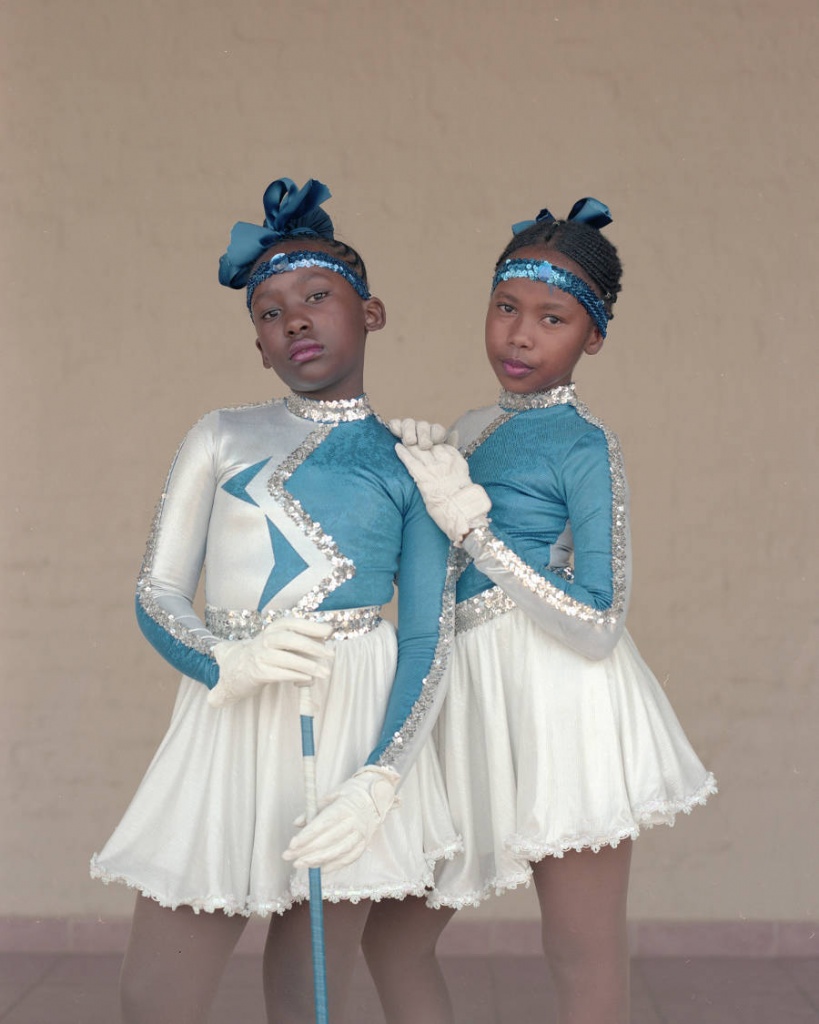 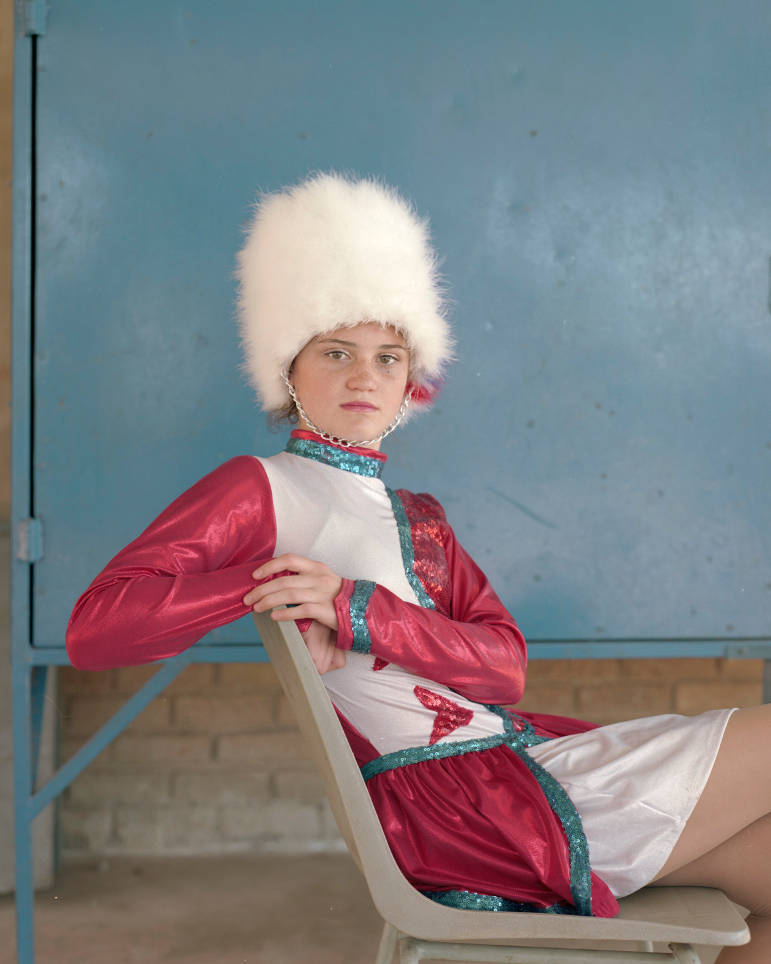 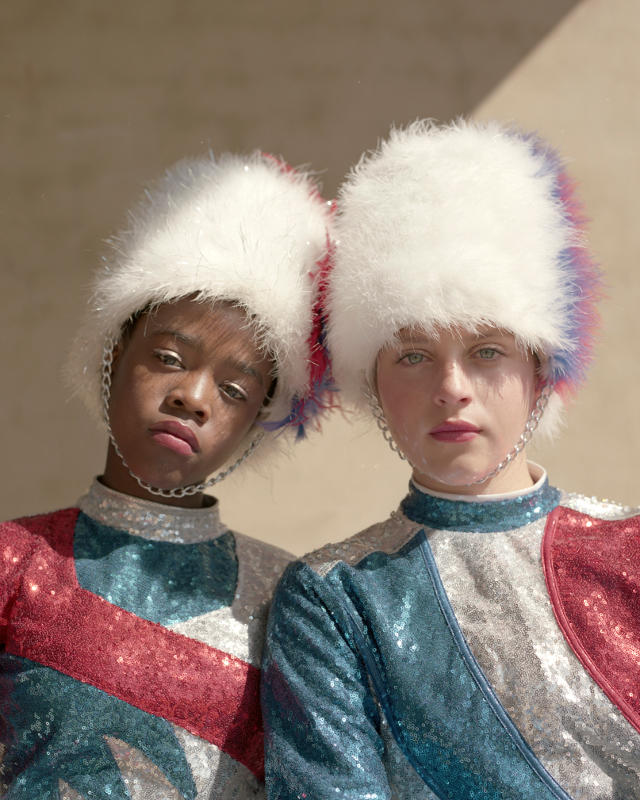 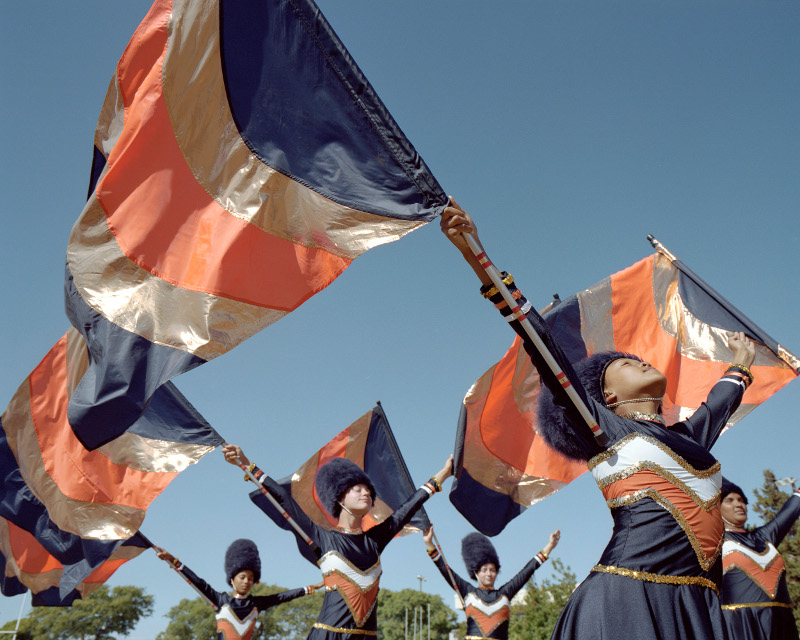 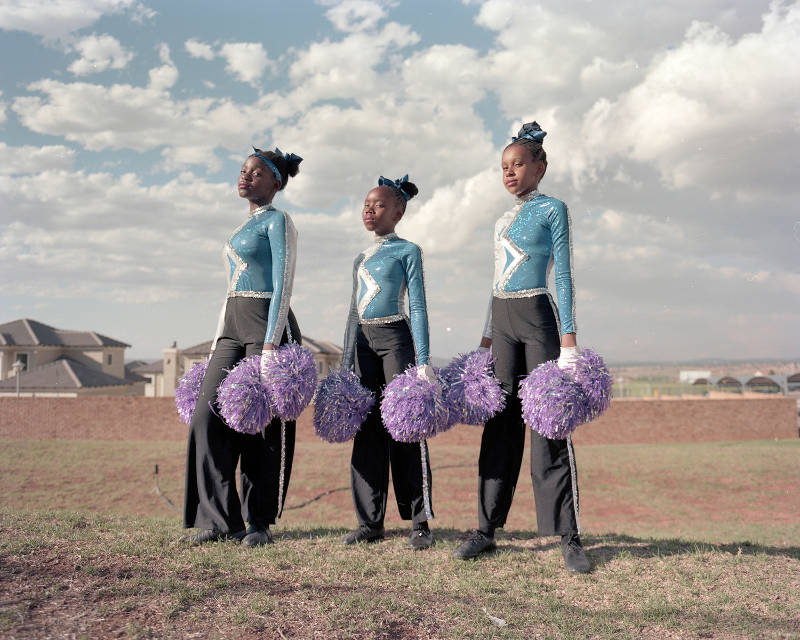 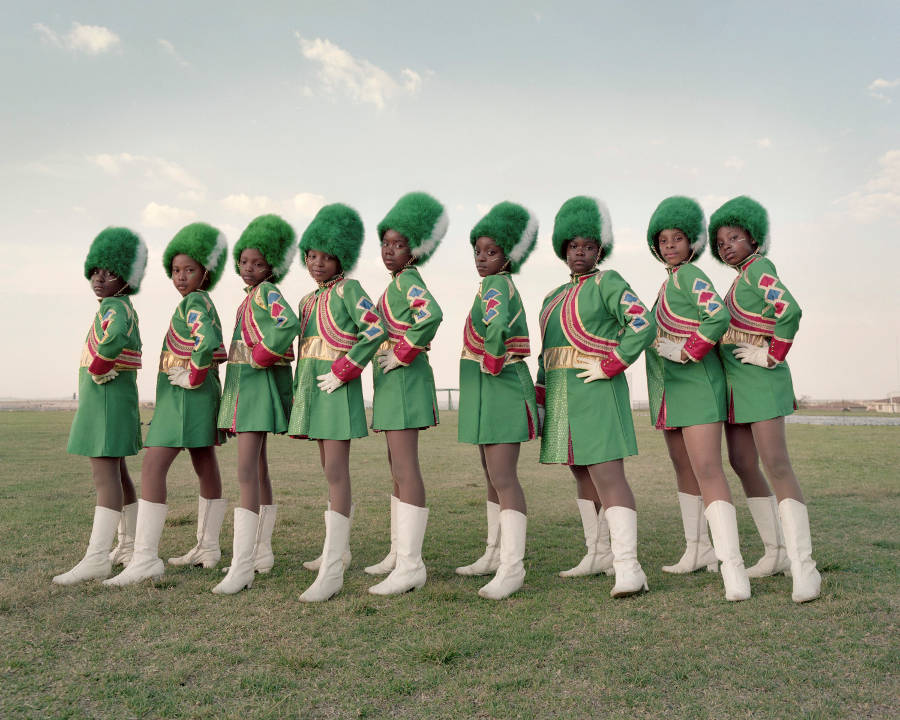 Drummies by Alice Mann | Through the Eyes of Christine Eyene

Christine Eyene is an art historian, critic and curator. She is a Research Fellow in Contemporary Art at the University of Central Lancashire (UCLan) where she collaborates to Making Histories Visible, an interdisciplinary visual arts research project led by Professor Lubaina Himid CBE, documenting, supporting, and sharing the histories of creative practices from the diversity in Britain and globally through collaborations with artists, art professionals, independent organisations and major public institutions.

Visit the exhibitions, research and publications pages for more information. 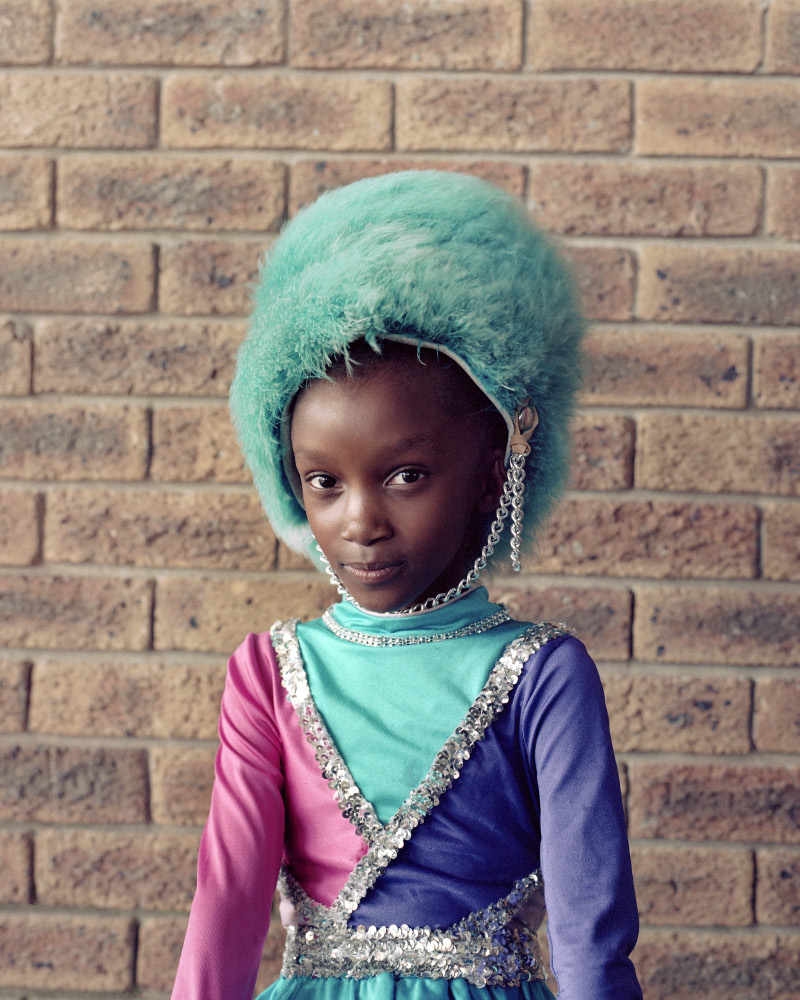 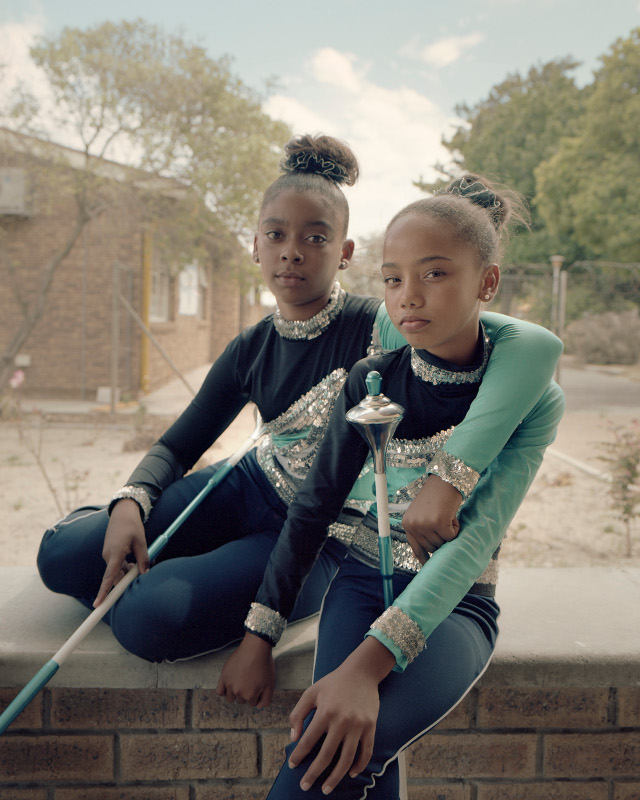 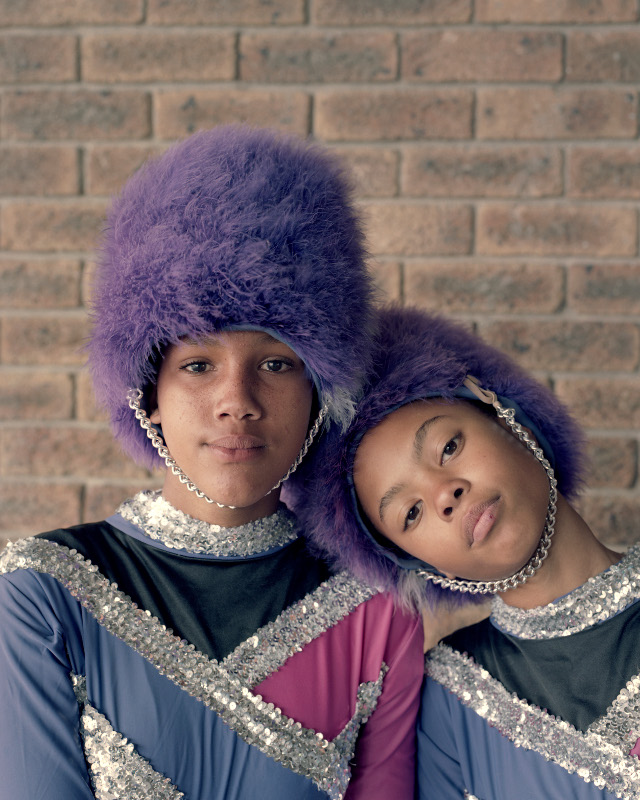 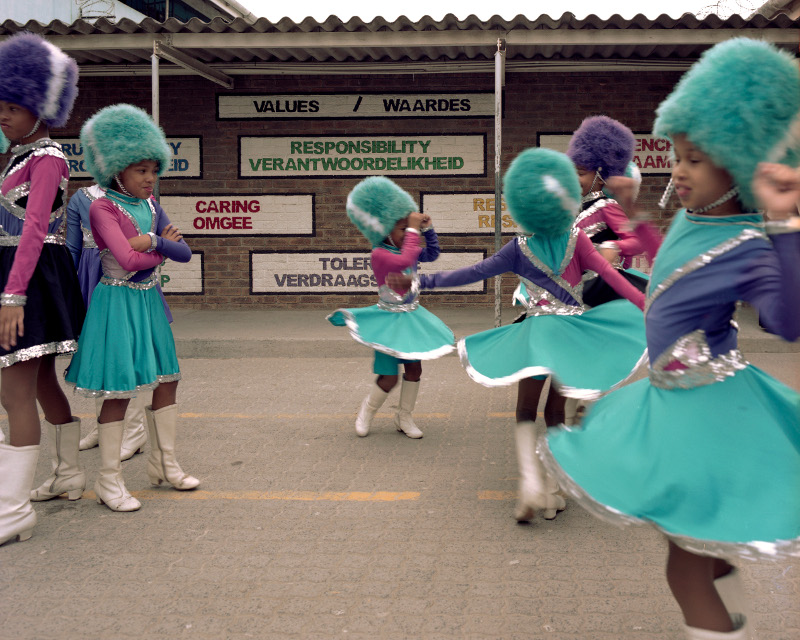 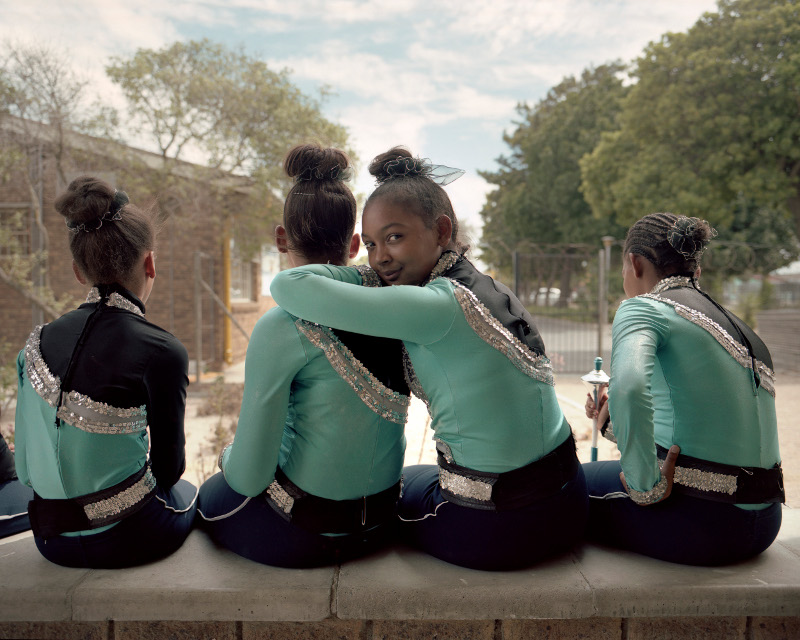 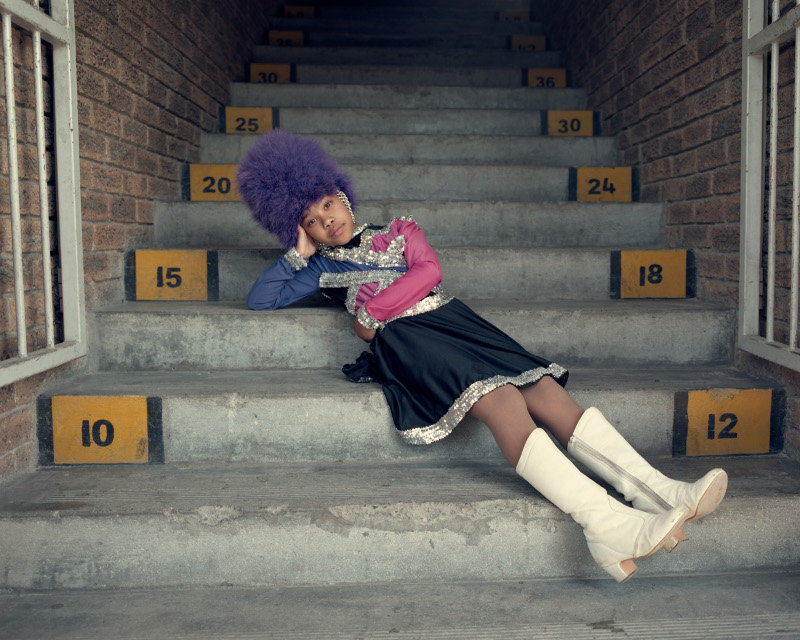 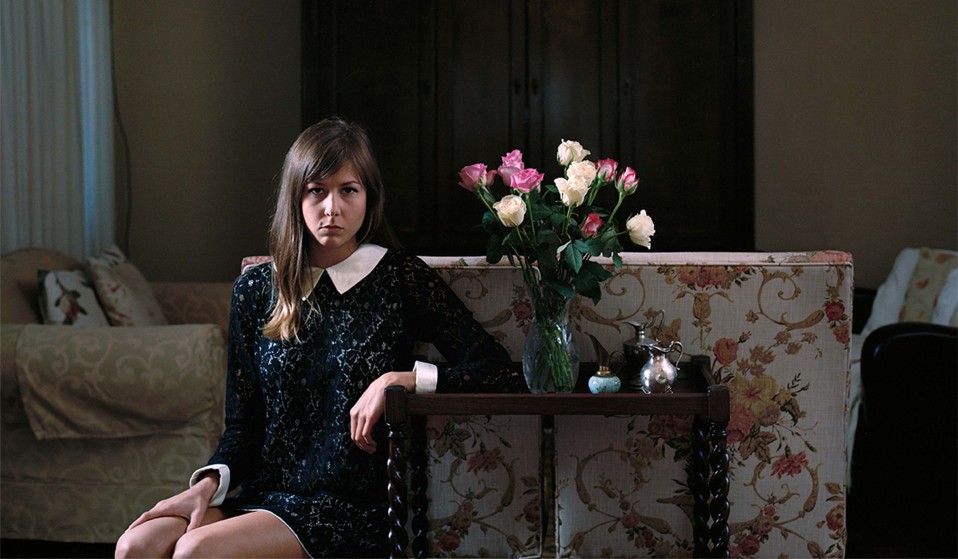 Born in Cape Town in 1991. Lives and works between Cape Town and London.

Alice Mann is a South African photographic artist whose intimate portraiture essays explore notions of picture making as an act of collaboration. She aims to create images that empower her subjects and creates projects over extended periods, allowing for engaged and nuanced representations.

Her award winning series ‘Drummies’ exploring female drum majorette teams in South Africa, has been selected as a winner of the Lensculture emerging photographer prize (2018), the PHMuseum Women’s ‘New Generation’ prize for an emerging photographer (2018). Four images from the series were awarded first place at the prestigious Taylor Wessing portraiture prize (2018). Mann was also the recipient of the Grand Prix at the 34th edition of the Hyeres International Festival of Fashion and Photography (2019). 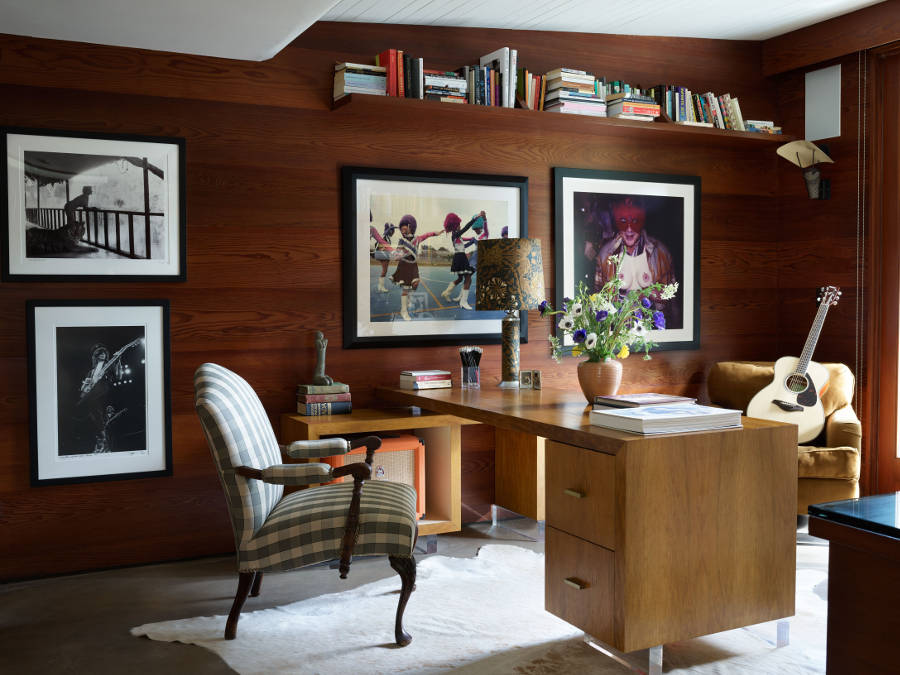 These four women are changing the face of Modern African Art |October 2019, i-D

Known for her portraiture essays that put the collaborative nature of both image-making and identity-making in focus, Alice Mann is quickly rising the ranks of fine art photography 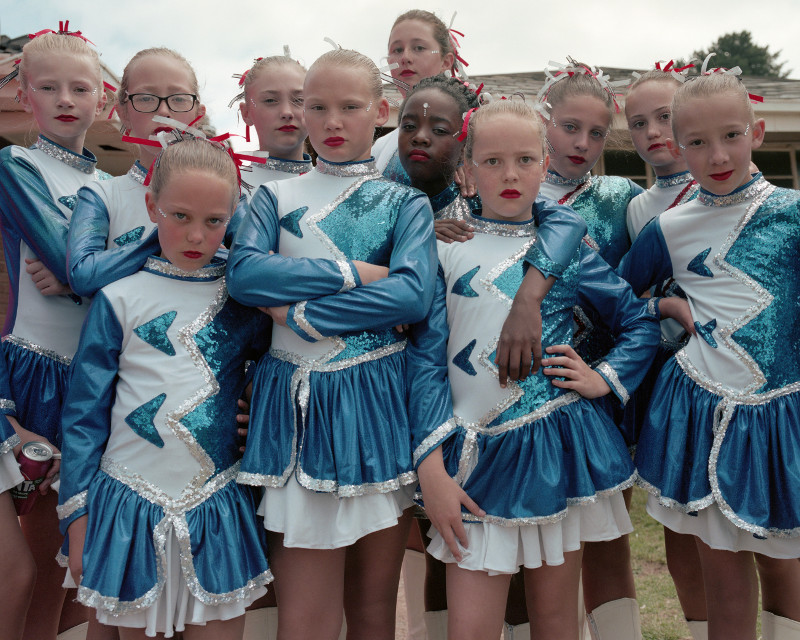 Nine photographers changing the way we see Africa and its Diaspora | October 2019, anOther

The all-female drummies that Mann photographed for the series hail from neglected communities in South Africa, and take deep pride in competing in the troupe 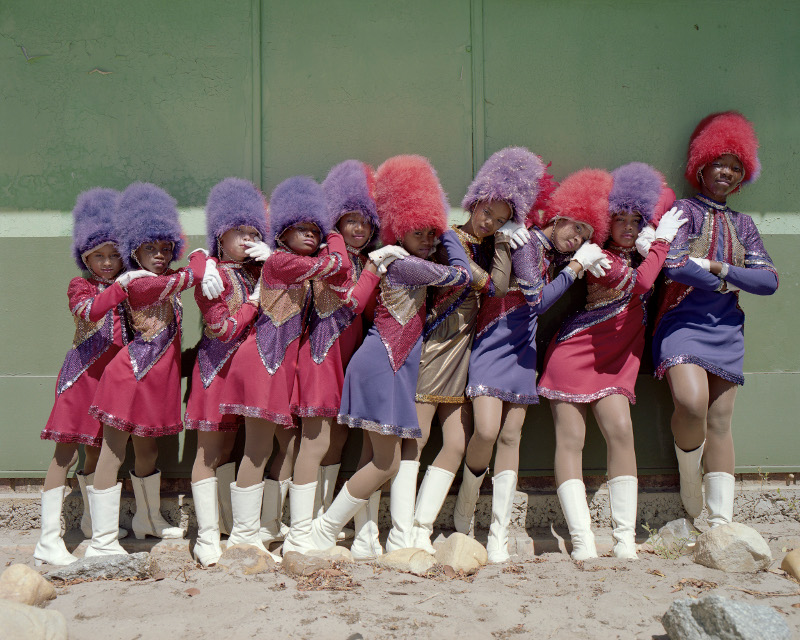 Cape Town-born London-based Mann scooped two prestigious prizes for Drummies (2017), her documentary series of all-female teams of drum majorettes in South Africa. The series is part of Mann’s wider exploration of femininity and empowerment, and explores the role of commitment and kinship experienced by majorettes living in marginalised communities 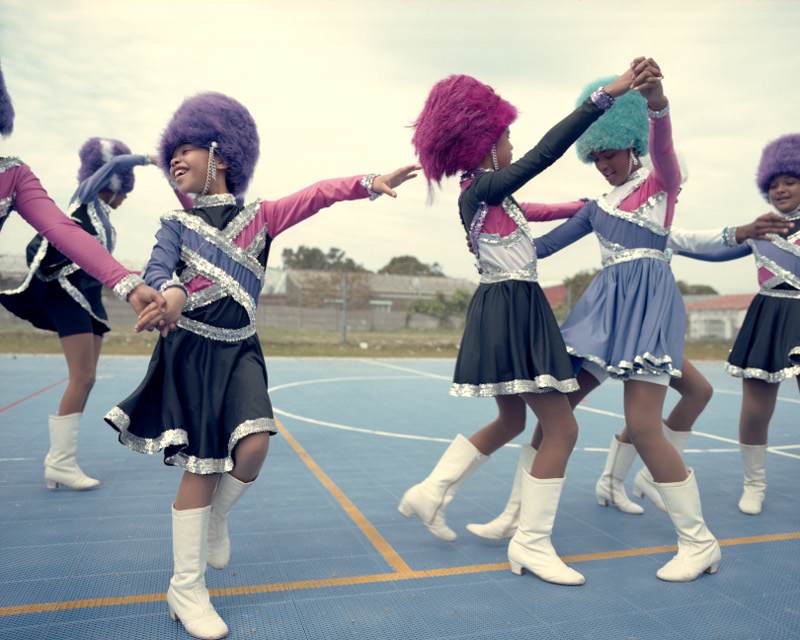 Female in focus: "Dominance is often a characteristic associated with men" | March 2019, British Journal of Photography

Alice Mann is a South Africa-born, London-based photographer, who was awarded the prestigious Taylor Wessing Photographic Portrait Prize in 2018 for her photographs of all-female teams of drum majorettes in South Africa’s Western Cape province 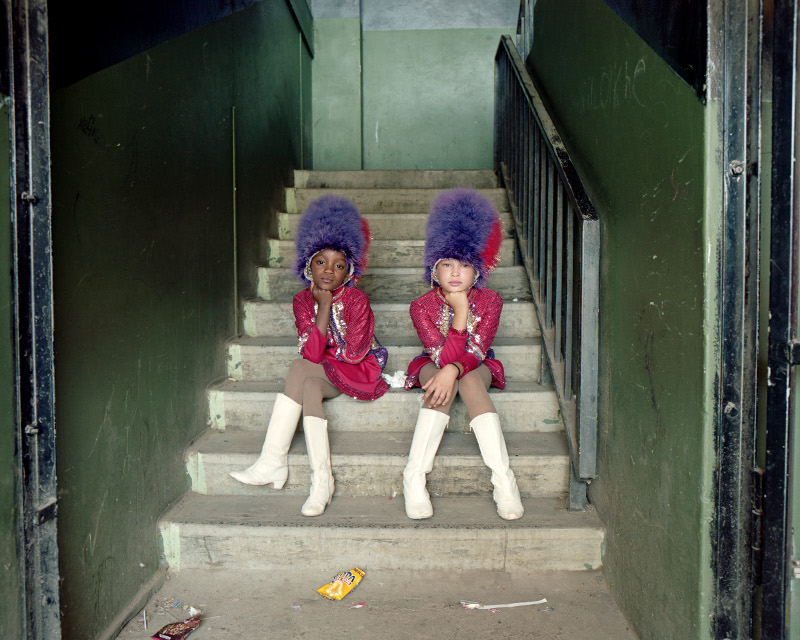 The Drum Majorettes of Cape Town | May 2018, The New Yorker

Ranging from five to eighteen years old, the majorettes are accustomed to moving their bodies with patience and discipline, harmonizing the nimble arts of flag-waving and baton-twirling with the military precision of moving in formation. The students acted as self-appointed assistants in the staging of scenes; at times, there would be fifteen girls watching over Mann’s shoulder as she replaced a roll of film 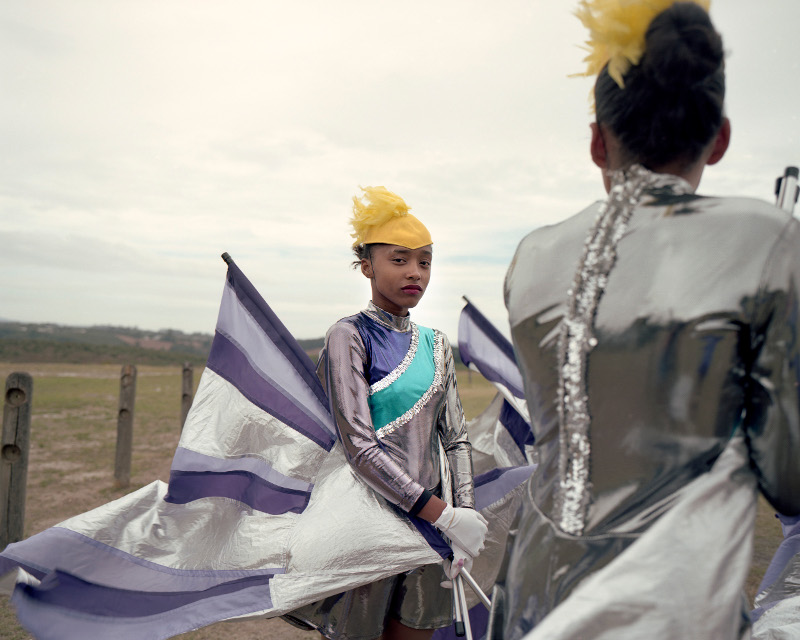 We first heard about Alice Mann a few years ago. Alice sent us a portfolio. Drummies was not in there. Southern Suburbs was. I remember being immediately grabbed by the images. They aroused both discomfort and delight in me, the sort of confusion I enjoy when watching a David Lynch movie. Today, looking at the Drummies series, I feel the same guilty pleasure. The perfect composition, reminiscent of 19th-century realism, as Christine Eyene sharply observes in her filmed commentary above, combined with the flashy but slightly faded colours of the drummies’ uniforms and the gang-like expressions on these young girls’ faces, subtly reminding us of the tough environment they have to survive in, makes the work of Alice complex, poignant, and political.

Drummies is the result not only of Alice’s complete dedication to these young girls, but also of the countless questions she asks herself about how power is « really » shared.

We always have lengthy conversations with Alice. I remember very well the first time we met in person. What was supposed to be a one-hour meeting ended up being a seven-hour conversation! We had drinks and dinner with collectors and artists. Alice knew the works of all the artists who were there with us. She mentioned this or that exhibition and the books she loved to collect. I remember our laughing when she kept repeating to Lawrence Lemaoana or Lebohang Kganye, « I’m such a fan! ».

Alice Mann is a curious, spontaneous, honest, and thoughtful artist. AFRONOVA GALLERY is thrilled « to bits and beats » to be working today with such a talented artist!

Contact us for more information on the artist or her artworks

By subscribing to our newsletter, you will receive news and updates from AFRONOVA GALLERY.